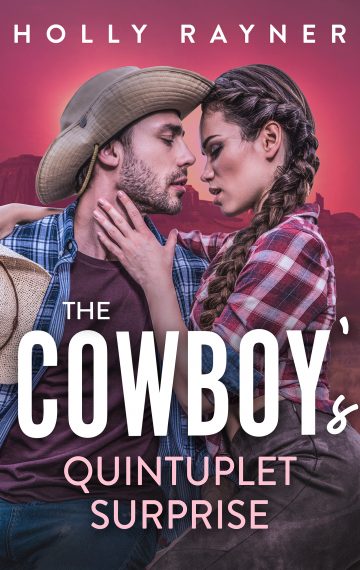 One young woman, fresh out of the city
One irresistible and red-hot modern cowboy
And FIVE bouncing babies!?

As the youngest of six siblings, Susie Avery is used to her own happiness coming last. Her sisters and brothers are all married with kids, and though she adores her nieces and nephews, she’s secretly a little jealous. Taking her happiness into her own hands, she decides to adopt a puppy—but ends up meeting more than just a furry new friend, in the shape of Sam Cranston, a gorgeous rancher with a hint of an Irish accent, even though he’s never been out of Kansas…

Within minutes of their meeting, a tornado rolls in and forces the two of them—along with twelve puppies and their mom—to take shelter in his tiny cellar together. In no time, Sam’s inviting her to stay the night, and just like that Susie is starting to wonder if she ever wants to leave the beautiful ranch at all.

But just as she’s beginning to dream of a future with Sam, he reveals it’s not to be: in just a few days’ time, he’s moving to Australia! Bitterly disappointed, Susie knows it’s time to get back to her real life, and settle into a routine with her new pup.

There’s barely time to get used to having a puppy around the house, however, before Susie discovers she’s pregnant—and it’s not one baby, but five! Desperate to let Sam know he’s going to be a father to quintuplets, she tries searching for him online… only to discover heartbreaking news.

All alone, the potential love of her life gone, and with five babies and a puppy to raise, what on earth is Susie to do? If she’d only gotten in contact sooner, if she could go back in time and tell him how she felt during the time they spent together… If only, by some magic, he was still out there, waiting for her…