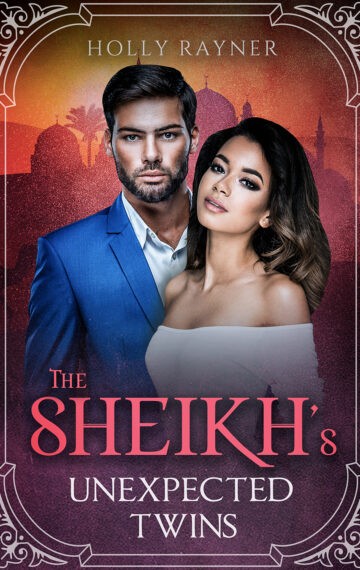 She went to the Middle East on business, but she’s coming home with twins
She never expected that one night of passion would change her life forever.

Eloise Lang thought her trip to Al-Zhera would be a pain. As assistant to one-heck-of-a curmudgeonly CEO, she’s used to putting other’s needs before her own, and this trip is set to be no exception—until, that is, she catches the eye of the man they’re there to do business with, the quite-frankly gorgeous Sheikh Masoud Khan.

It’s not long before the business deal goes in flames, when the Sheikh’s company reveals its morality clause—a surprise addition her philandering boss simply can’t swallow. Free of the shackles of work, and her boss’s watchful eye, the Sheikh offers Eloise the chance to be his princess for the day, living out her royal fantasies in the exotic land of which he is royalty. After a whirlwind tour of palaces and secret passages, the two enjoy a stolen night together.

Aware that their romance was only ever to last one night, Eloise soon finds herself bidding her gorgeous lover farewell. Little does she know that the Sheikh left her with more than the memories. Pregnant with twins, she knows she must tell Masoud the truth—she just never planned on her boss finding out first.

Gleeful at having caught the Sheikh breaking his own rules, the odious Patrick seeks to use Eloise as leverage in his deal. With nowhere else to turn, Eloise and her babies are about to become pawns in a much bigger game.

This is the second book in the You Can’t Turn Down a Sheikh series.