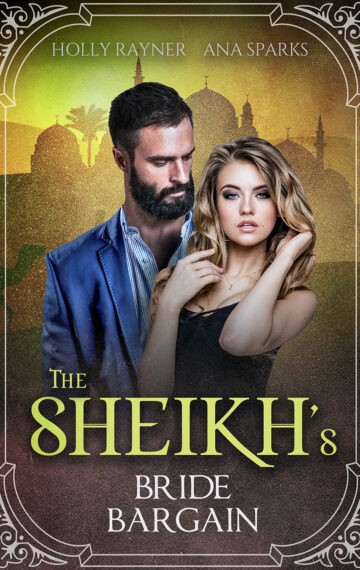 Forced into marriage to unite two warring families,
A prince, an heiress, and one very royal feud.
Bargained to the Sheikh, can she find a love to beat all odds?

Dakota Lee has a problem. With her family stuck in a perpetual feud with one of the Middle East’s most influential families—and a royal one at that—drastic measures are necessary to mend the rift, and ensure they’re not kicked out of the country. Little does she know, her family already have plans to offer a substantial peace offering. Her own hand in marriage!

After a disastrous first meeting with her husband-to-be, Majeed bin Ayad, the brash and impetuous sheikh and oldest son of the royal family, Dakota fights to reverse the deal, but her pleas fall on deaf ears.

With the unlikely fiancés used as bargaining chips on a grand royal stage, the two soon discover that with second chances come unlikely bonds, and burgeoning feelings in the most unusual of circumstances. By the time her wedding day comes around, Dakota thinks she may be really falling for her husband-to-be, only for their respective families to very publicly fall out and call the whole thing off!

With the wedding plans in pieces, Dakota soon finds herself an outcast; exiled from the country she has come to love, and forcibly split from the fiancé she’s fallen for. Can their love take flight, despite their families’ bitter feud? Can they unite the families that, for all the very worst reasons, united them?

This is the fourth book in Holly Rayner’s You Can’t Turn Down a Sheikh series.