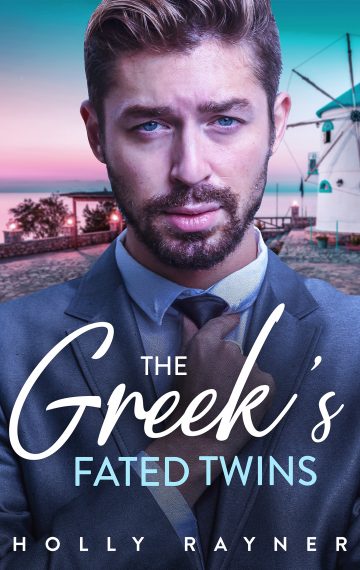 One baby is a blessing.
Two babies? It must be fate!

Cassie Veiland is a professional con artist, jet-setting around the globe and swindling rich men out of their money. The twist? Rather than spend it on herself, she gives it up to charity.

Growing up as a foster kid, Cassie never had a real place to call home, or real people to call family. She’s lived a life of crime and lies as long as she can remember, and is tiring of the dishonesty, wanting to start fresh.

Cassie serendipitously meets the perfect target—a Greek billionaire named Angelos—at a carnival, when they both meet a fortune teller at the same time. This has to be her last job, she tells herself, to tie up loose ends, and start over for herself.

What she doesn’t expect, though, is unlike most of the men she swindles—entitled, sleazy, greedy—Angelos is none of that. He’s humble, kind-hearted, and a gentleman through and through.

Her conscience starts to eat her up from the inside out as she realizes she’s falling in love with the man she’s planning to con, and she doubts her ability to separate business from pleasure and be able to steal from someone who has become the best thing that’s ever happened to her. Especially when she gets the news that changes everything: she’s pregnant!

The fortune teller said that future with Angelos was only beginning, and that good things for them would come in twos. When Cassie discovers she’s having twins, does this ensure she’ll get her happily ever after?

This is the second book in the Greek Gods series.