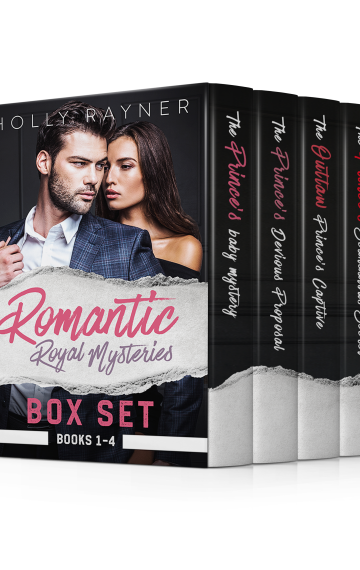 The Prince’s Baby Mystery:
Charlotte Lange is a New York playwright on the cusp of success. After finally tasting triumph with a blockbuster new show, celebration is on the cards. The drop-dead gorgeous man in the front row is merely a bonus.

Thierry is the mysterious man who danced through one night of her life, then seemed determined to be forgotten. A keen theatregoer, and a nigh-irresistible face in the crowd, he shows Charlotte what dreams are truly made of, before vanishing completely.

Now, Charlotte has a problem. She’s pregnant, and the idea of Thierry never finding out is unconscionable. She resolves to find him, no matter what it takes.

The Prince’s Devious Proposal:
Naomi West is a one-time singing star, now corporate receptionist. For a few precious months it looked like she might be on the verge of a successful music career, only for her hopes to be dashed. Now, she spends her days trying to avoid her vindictive, borderline-cruel boss. Family tragedy has dominated the last few years, and she’s lost her joy for life.

Hope arrives in the form of a fan who still believes she’s a superstar. And he’s not just any fan; rather, a tall, dashingly handsome prince!

Petr Agridis, prince of Sovra, sweeps Naomi off her feet. When he proposes just a few days later, she can’t think of a reason to refuse – she’s never been happier in her life.

It’s only after the wedding night that she begins to realize that things don’t quite add up. And there’s an awful lot she doesn’t know about her new husband…

The Outlaw Prince’s Captive:
Francesca Belluci is the only woman in her department, and her boss won’t let her forget it. Now that she’s finally been handed a big assignment, she’ll stop at nothing to see it through.

The ambitious rookie heads to Europe to track down Viggo Lindström, a wayward prince accused of murder in the United States. After going it alone, and sneaking into his plush island residence, the weather turns, and she’s horrified to find herself snowbound with the very man she came to investigate!

As the two get to know one another, however, they begin to realize that Viggo’s case isn’t as clear-cut as it seems. Soon, Francesca finds herself willing to risk everything for the prince whose only crime was stealing her heart.

The Prince’s Scandalous Secret:
Having just inherited her estranged father’s mansion, Rhea arrives in her Upstate, NY hometown ready to renovate the place and sell. She has seven weeks before she returns to her teaching job in the city. Seven weeks until she can be rid of the last vestige of her childhood, and all the painful memories that go along with it.

The smoldering-hot neighbor who just happens to be handy with a hammer? He’s just the distraction she’s been looking for.

As mysterious as he is alluring, Leon brings joy and laughter to what is at times a painful process. It’s not long before the two become close, and Rhea finds herself falling for the gorgeous guy next door, despite knowing little to nothing about where he came from…