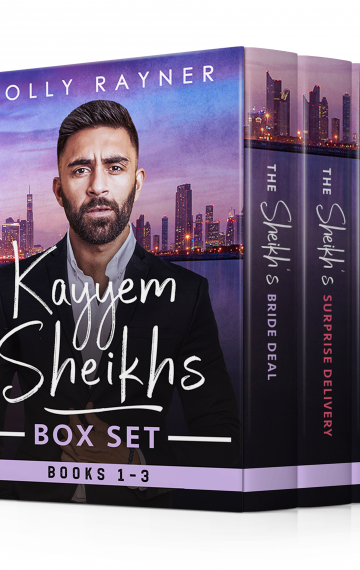 This box set is Holly Rayner’s complete Kayyem Sheikhs series of middle-eastern sweet romance novels. Three sweet and salacious tales of irresistible princes, fish-out-of-water heroines, and exotic tales of escapism await you, and all for a bargain price!

The Sheikh’s Bride Deal:
It’s the deal of a lifetime
But she forgot to check the small-print…

The Sheikh’s Surprise Delivery:
A single stolen weekend with the sheikh was just the medicine she needed
But months later, she’ll have an adorable surprise delivery for him!

Amber Warren may be a successful saleswoman, but it isn’t the life she envisaged for herself. Though her work lets her travel often, it isn’t the free-spirited lifestyle Amber wants. Surely there’s more to the world?

Khalid Al-Sharim grew up a member of the most influential family in the city-state of Kayyem, with many expectations placed on him by his parents to join the family business. But Khalid always knew he wanted to forge his own path to be a real-life hero: a doctor.

When Amber falls and hits her head during a convention in London, the first face she sees is that of a stunning, middle-eastern sheikh and doctor. When he nurses her wounds, and promptly asks her on a date, she seizes the opportunity of a lifetime to have a magical, impulsive weekend with him, promising herself it’ll just be a fling.

But as soon as Amber leaves London – and Khalid – she comes to make two earth-shattering realizations: she’s for falling for him, and she’s pregnant with his baby!

With no contact information for the sheikh doctor, and living on opposite sides of the world, Amber has to find him and tell him her important news. Will fate be on her side?

The Sheikh’s Priceless Baby:
She stole something valuable.
Now she’s giving him something priceless in return…

Faye Darlow, international journalist, is scrambling for cash. With her parents fighting foreclosure on their house, she needs a big break, an exclusive so irresistible that editors will fight to pay top dollar for it.

When she manages to land an interview with Sheikh Aziz Al-Sharim, dynamite real estate developer and member of one of the wealthiest families in the Middle East, she feels like she’s lucked out. Not only is it a great opportunity, but her subject is drop-dead gorgeous and charming to boot!

But when the time finally comes for the interview, Faye’s usual professionalism falls by the wayside, and she and Aziz end up in bed together!