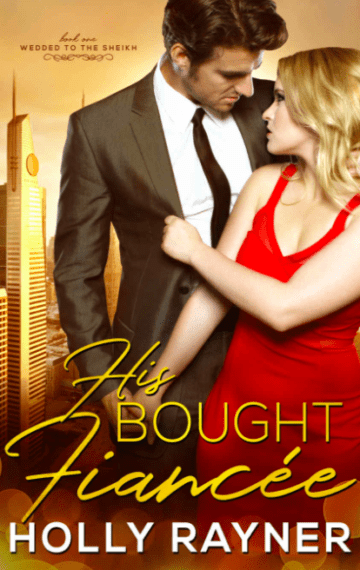 She grabbed him off the street to play her boyfriend—
She had no idea he was royalty!
A week later, and he’s asking her to repay the favor.
This time, she’s the fake fiancée, and he’s paying!

High school reunions are bad enough,
But seeing my ex with his wife and baby pushed me over the edge.
I grabbed the first guy I could find on the street outside
A Middle Eastern god, just out for a stroll
Well, it turns out he’s a sheikh
And he wants me to convince his royal parents that we’re in love, and I’m his fiancée!
I didn’t realize I’d be playing the part of a princess!

A fiancé for one night only—now there’s an idea.
Maybe we can keep up the pretense a little while longer.
I need the perfect American princess to fool my pushy parents
I was hers for one night. Will she be mine forever?

This is the first book in Holly Rayner’s Wedded To The Sheikh series.